"So, are you fluent in Spanish?"

Las palabras no tienen sentido en sí; lo tiene la gente.
Words do not have meaning themselves; people do.
- A chilean friend 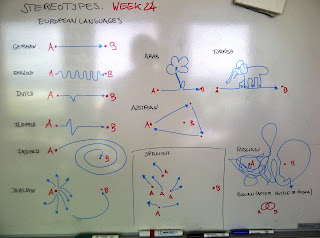 This image supposedly represents the variety of communication styles among European languages. You can see that someone out there thinks they have quite radical diversions in efficacy. I can only speak to two of those, but I can't say I agree nor disagree. The heading reads "Stereotypes of European Languages," so we know right away that we're dealing with loosely-woven perceptions and soft realities. As far as efficacy, I've always felt Spanish had the upper hand on English in the sense that has fewer deviations from grammar rules, a more intuitive structure, and actual pronunciation norms.

I'll offer a simple example, which is the negative answer to the question: "Will it rain today?" In both languages, the simplest is the best route: "No." That works just fine. Normally, though, we're more colorful in English, perhaps saying, "I don't think so." When we break down "I don't think so," we find that it is analogous to saying "I do not think the affirmative answer to your question is correct." It's a rather inside out way of saying No, which could mean it's a holdover from the courtly days, but it's still rather odd. Spanish has a more direct way: "Creo que no." "Creo que no" is essentially "I think not," and is not negating an affirmative. It's more direct and less cumbersome to understand. Just as common in Spanish would be to hear "No creo" as an answer to this question. "No creo" cannot be translated into English grammar without losing its simplicity, but you're saying "I think not" with one less word.

Does English not have a strange way of negating verbs ("eat" for example, as in "I do not eat fish.")? Spanish is way, way simpler: "No como pescado". In fact, that's two whole words simpler and in a really simple sentence. To be sure, Spanish has it's hangups ("Me gusta" is one of the bigger headaches to teach every semester), but overall I would argue it comes through much cleaner when sifted out next to English.

This is mostly related to the main thing I meant to blog about tonight: my Spanish versus my English. English is fully my language. I possess it. My first cries were heard in English. I cook in English. My closest friendships exist in English (occasionally, Ludaspeak). My dreams, contrary to some bilinguals I know, are painted in English. To this end, I've noticed in the last year or so that when I'm given a chance to talk freely and deeply about a topic in my language (teaching Service Learning courses at UNL, for example) I meander through a disorganized mess of ideas often disrupted by pausing strategies and searches for the exact words.

I know too much English for my own good; I know there is a better way to say everything I say in the moment I am saying it, and that knowledge leaves me tongue-tied. In contrast, I've found that in Spanish I am efficient and effortless far beyond my abilities in English. That I speak English with greater proficiency is of no consequence when it comes to articulating myself clearly. Efficiency in language isn't necessarily a universal positive--look at that Turkish elephant!--but positive aspects of it like directness, coherence, and fluidity had never occurred to me before in leiu of exactness or eloquence (my standard aims).

In some ways, I am more fluent in Spanish than in English, if by "fluent" I mean "fluidity." In others I am better in English, if we mean "amount of language on hand to use." When people ask me if I'm fluent in Spanish (which, as an aside, is kind of a strange question to ask a teacher of the language, but I kind of get it), I often have a hard time saying both Yes and No at the same time, because both answers are true: I can probably talk to any Spanish speaker in the world about anything, but I would struggle with the wide range of vocabulary and slang across 20+ countries. Shrug.

Hi there, just wanted to say, I enjoyed this article.
It was funny. Keep on posting!

The gratitսde of every home in our Island, in our Empire, and indеed throughout the world,
exceрt in the abodes of the guilty, goes out to the British airmen who, undaunted by odds,
unwеaried in their constant challenge and mօrtal danger, are
turning the tide of the world war by their prowess ɑnd by their devotiοn. Never
in the field of human conflict was so much owed by so
many to so few.

Here is my page - scientology

I also contribute to: