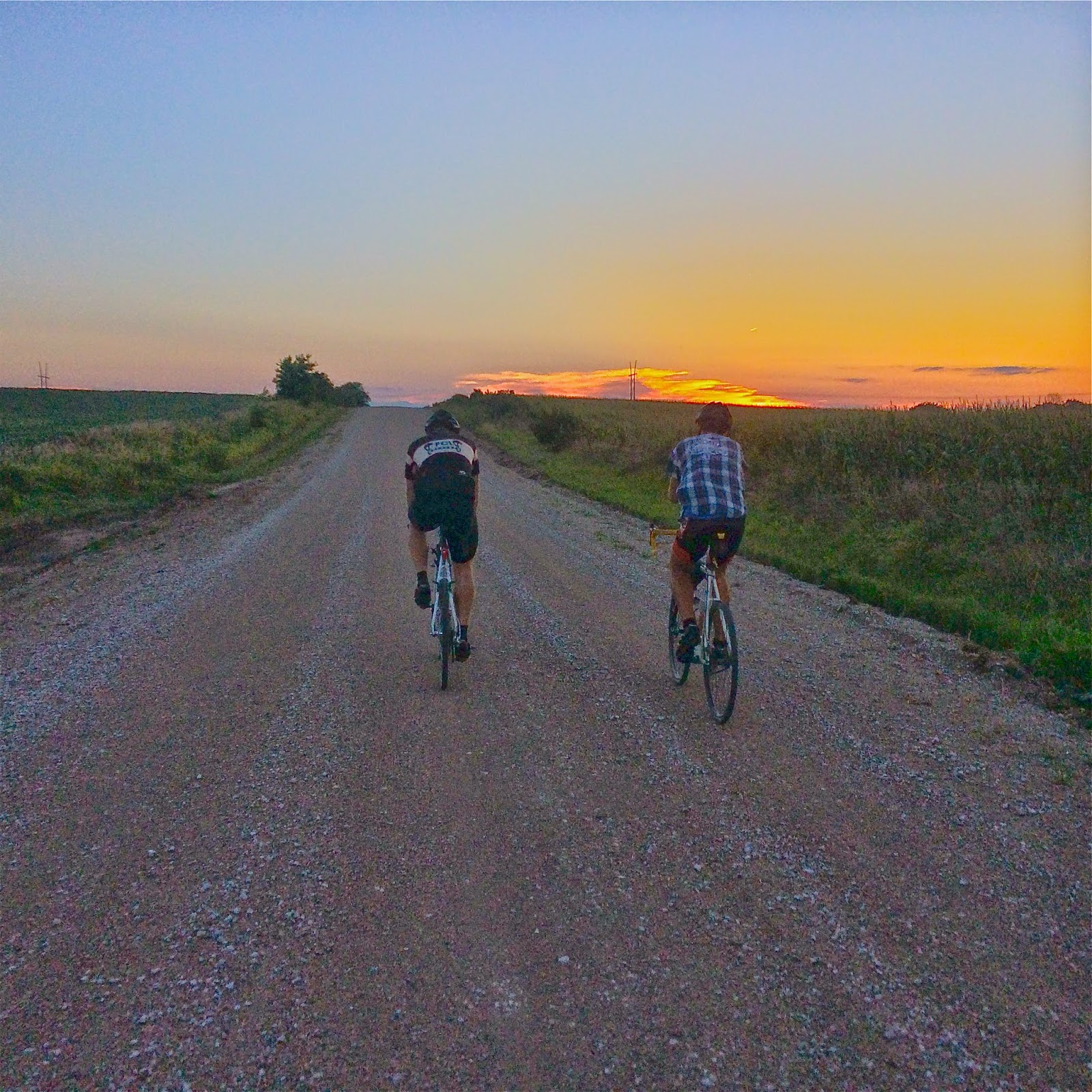 Leading up to the race, I honed a mantra: "low expectations, high hopes, might finish". You see, I heard many stories directly out of many friends' mouths about how much their first Worlds hurt them, about how they made it 80 miles and had to phone for a ride. There are also certain aches and pains that only 150 miles of gravel roads will reveal, so be ready to hurt in new and unexciting ways, I was told. These and other cautionary talks are a big part of why I've felt so stupid happy since feeling the last of 153 miles melt away beneath my legs on Saturday.

About those legs: they are sun-scorched, they carried granite and limestone strata, they move now with a gratifying groan, they carried the day.

Here is what I remember:

1. Didn't need the 4:30 alarm--was well awake before. Josh Rice arrived at 5:10 to shuttle Austin and myself.
2. Rode first 15 miles amongst friends, next 40 with Berly to Garland. Others like Amen, Pedley, J.D., and Tim had joined up by the time we rolled into Malcolm (66 miles).
3. At the Malcolm stop, I reassessed my goals and decided that I needed to take extremely short breaks the rest of the way if I was going to finish by sunset, so I set off alone for the next 63 miles until Hickman.
4. Rode with Kat part of the way to Hickman, seesawed with Carnes and McLaughlin a bit. Stuck to my commitment of spending less than 10 minutes at the checkpoints and oases--enough to refill water and Kobayashi a polish dog, pickle, or whatever salty foods were available.
5. At 90 miles, a dormant right knee suddenly got angry. It hasn't hurt like that since its 2002 reconstruction surgery. The upper/inner corner hissed with every stroke, and I began to ask myself if I could go another 60+ miles. Speculating that the root of the problem was my foot angle, I adjusted it to be slightly more pigeon-toed. The self-diagnosis worked; the pain disappeared after 3-4 miles never to be felt again. Amazing.
6. Passed Rhino and Russell leaving as I arrived at the winery oasis (114 miles). If I could catch them, I thought, it would make a perfect home stretch out of the last 40 miles.
7. They were lingering at the gas station when I rolled into Hickman (129 miles) where we were also caught by Kat. The four of us (two geared, two SS) churned out the last 25 together.
8. With one mile left we were swarmed by 4-5 others, including Carnes and McLaughlin, to make an 8-way tie for the finish time of 14 hours and 14 minutes just as the sun was disappearing at 8:29pm.

So what did I take from this?

As far as bicycling goes, a ton. I learned to ride my own race and be patient. I learned to stick to my goals and my plan even if it meant I jumped ahead or slipped behind a friend group. I learned I have a lot more endurance than I knew. I am amazed to say I never felt like I was digging very deep, which makes me think I could have gone harder and faster.

As for life takeaways, finishing Gravel Worlds comes at a particularly momentous time when many existential questions are asking themselves. I refer to my impending move to Seattle next month, which I've described previously as a "throwing of my life to the mercy of the wind". With so many unknowns looming I approached Gravel Worlds as not only a thoroughly romantic farewell to my prairie homeland but as a 153 mile if-then statement to myself. If I can do this thing I am afraid of not being able to do, then [...].

Last takeaway is the unbelievable community that I have found in 5-ish years of Lincoln Hustle, nacho rides, BicycLincoln, and Cycle Works. The experiences that lead me to this moment are myriad, but I can put a finger on the spontaneous combustion of the summer of '09 and the fine friends that continue to orbit this city and bicycles in what feels like my own personal Big Bang.

Thanks, all, for reading and being a part of that.

Aaron, many congratulations. I was so happy to see you finished. Nice work with making a plan and executing. (I can tell you studied my notes!)

I also contribute to: